Who Can You Trust, Alternative or Conventional Medicine?

In the metaphysical world it amazes me how easily modern medicine is discounted for natural remedies and homeopathy doctors. People act like zealots with their newfound knowledge along with the new perception of themselves, their lives and the world they live in. It’s as if the world they lived in no longer exists and no one from their prior existence is to be trusted, but their newly found Alternative Therapies and Remedies are now sacrosanct.

Prior to my metaphysical journey unfolding, I visited quite a few conventional doctors offices. For me it all started with a C-section to bring me into the world, then undiagnosed pneumonia at 9 months that thankfully my mother had the good sense to take me to the doctor when I had reached the point of sleeping for 21 out of the 24 hours of the day. The doctor told her it would have been lights out for me in another 24 hours. I then had 4 incidents of stitches to the forehead and my upper lip. The minute I got a cavity in my baby teeth, it would abscess and I would have to have a metal spacer placed between the teeth until the permanent tooth came in to keep the space intact. I use to love these pieces of hard cinnamon candy that were called kisses and they had a gooey consistency after you sucked on them and then tried to chew them. My mom wasn’t a happy camper when the gooey cinnamon candy would pull the spacer out. They knew me intimately at the dentist office. LOL. Did I mention that all this happened before I was 6?

As I progressed into high school, I had knee surgery from a football injury, lost 6 front teeth as I caught a baseball in the mouth. In adulthood I continued to battle my teeth, then at age 42, I was diagnosed with Testicular cancer. The doctor recommended surgery of which I had 3 days later. I then did 15 treatments of radiation of which I still have the 3 ink dots they tattooed on my abdomen that the machine would project a red beam onto to insure proper alignment before they pushed the radiation button.

Since opening the door metaphysically 12 years ago, I have continued to have ailments, but I have come to understand them as energy events. Why do I say that? In my truth, everything is energy and pretty much anything that manifests to the physical needs to be dealt with by releasing the energy, or by physically removing it.

Releasing energy in the metaphysical world usually means that you work through an issue or issues related to the trapped energy that has worked its way to the surface, i.e. the physical. This is usually associated with a Past life event or possibly a behavior in this life. Personally, I feel anything in this life is always derived from a past life. There are many modalities you can use to shift the energy and your hope is to dissipate the energy that has come to the surface.

For example, when I visited London 3 years ago, I had a vivid past life come to the surface where I had been a young chimney sweep. In that life, I had slipped and as I grabbed hold of the chimney with one of my arms to prevent my fall, my weight and the weight of my tools severely damaged my arm and crippled me in that life. As this energy came to the surface in this life I couldn’t raise my arm above shoulder height. With the realization that this was past life energy, I used affirmations and weekly massages to manage and work through the energy. It took me 1.5 years to clear the energy. At one point, I was doing 3 massages per week just to loosen up my shoulder, as all the muscles under my armpit would completely constrict like closing an accordion. It was interesting because during the winter I had to learn to put my coat on without lifting my right arm.

Removal of energy on the other hand would probably imply a conventional doctor and treatment. As I stated earlier, a lot of metaphysical people turn a deaf ear to conventional treatments as they open up metaphysically and feel they can heal anything and everything through alternative therapies. I don’t subscribe to this train of thought. Through my experience, some energy comes to the surface that you can dissipate as I explained above, but I believe the soul also elects to remove large quantities of past live energy through physical conditions.

I have stated in prior newsletters that I came into this incarnation to work through a lot of anger. I have thanked and continue to thank those that chose this journey with me, because I have been less than nice at times with my intensity and anger. But I didn’t come to rid myself of my anger just through yelling and screaming at my wife, my kids, or my friends. I came to dump a lot of it via the physical. I come back to my teeth. From a very early age I began my lifelong teeth issue. Metaphysically, when you get angry and disgusted with yourself or someone else you tend to clench your teeth and push all that anger and frustration into your gums. Remember, as a youngster, when the tooth had an issue it abscessed, i.e. it died, fortunately I had the permanent one coming in to replace it, but then throughout my adult life my permanent teeth have always had issues and it always resulted in them dying also. I now have 18 root canals. Some people may think that is a bad thing, but in my truth, I got rid of a lot of anger that was etherically stored in those roots. I grew up in the Western world, I have had a toothbrush and toothpaste since childhood and I took good care of my teeth, but the Universe had other plans for those pearly whites; they’re now called crowns!

The same with my cancer, when they removed my testicle, I know there was a boatload of anger in that baby.  The irony of my cancer is that it was literally just a blip in my day. My colleague’s husband had the same issue and it took him two months to recover. I had outpatient surgery at 9am, was home by 1pm and managed a conference call with China at 3pm and left on a 10-day business trip to China 5 days later. It, like my teeth, just contained past life energy that I chose to dump rather than dissipate in this life.

We just had an issue with a cyst on Margaret’s arm. I had noticed that she had a scar on her arm when we first met. She had told me that she had it lanced a few years earlier when she was traveling in the UK. She had explained that it was kind of an overflow repository for energy she processes as an empath. So here we are some 12 years later in India and it flares up again. She did the, “I don’t want to go to the hospital act” that I implied up above concerning the Metaphysical Zealots, but as it became not just bigger, but redder and redder she heeded my words to go to the hospital. One big incision and 6 stitches later they had removed about 6 ounces of Angry flesh. The doctor actually called me in and held the mass in the palm of his hand. I kid you not; you could feel the anger oozing out of that piece of meat that engulfed the palm of his hand. Being a conventional doctor, he could see the infection, but he was oblivious to the energy that he had just removed from his patient. Is that such a bad thing or is just where he is on his journey at this point in time? Maybe the Metaphysical seeds that were planted by his patient might sprout in the future and enhance his medical knowledge.

While visiting the hospital the good doctors immediately saw Margaret’s voluptuous body as being over weight and recommended a gastric bypass surgery that actually sounded very good. Easy weight loss, had benefits of assisting to control her blood sugar level etc., but evaluating it from an empath/medium point of view we determined it would be too risky to her etheric body and energy field that is so critical to her work. We thanked them for their information and opted to decline their recommendation, but it also provided Margaret with some valuable information that she has incorporated into her diet.

Ironically, while this was all transpiring for us in India, a few Alternative Therapy doctors, like Dr. Oz were called before a US Senate panel to defend some of their “questionable promotion” of products that clearly make them a lot of money, but other than a figment of hope won’t bring the results that are so advertised to their clientele. If you would like a good laugh over the hearing and the industry in general, I attached a real funny YouTube clip from HBO’s John Oliver’s “Last Week Tonight” for your enjoyment. Remember, comedy can sometimes assist us to take off the blinders in a subtle, but funny way, and laughing endorphins are an incredible Alternative Therapy!! Enjoy …… P.S. Margaret watched it, and she laughed so hard she cried! 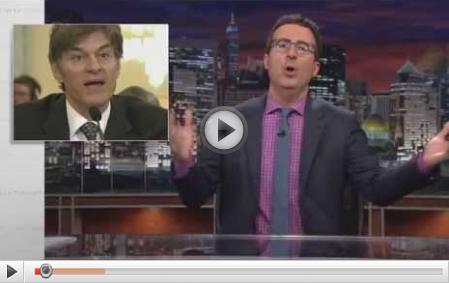 For me, this clip was close to home in its expose’ because I lived in Utah during the infancy of the Vitamin Supplement explosion, and Utah ended up being ground zero because they had the main US Senator who led the charge to insure that Vitamin supplements did not require any FDA government approval. My close friend Mark worked for one these startup supplement companies and their business went from zero to phenomenal overnight. He came home worried one night because if they had to actually FDA certify their products it was going to be game over for their lucrative business.

Now for me, I’m not a government regulation zealot and I do take my share of vitamin supplements, but some people with their new rose-colored Alternative Remedy glasses may not realize that the Alternative can be just as tainted as the Conventional.

So, who should you trust, the Alternative Therapies or the Conventional Medical Practices. I think you need to trust yourself to do your own investigations and go with what “You” feel. I don’t think you should discount any knowledge whether it is Alternative or Conventional; it all comes from the Universe. In my truth there is room for both and I think you need to evaluate your situation and then have a positive mental attitude surrounding your decision.

In closing, remember, everything is divinely inspired, but it always goes through this imperfect filter called humanity and that applies to both the Alternative and Conventional.