Shifting the Energy in Our Direct Living Environment

We are all pure consciousness, incarnating into a physical form on the Earth Plane. Thus, although we seem to be separated individually from each other, we are all energetically connected to each other, to our surroundings, to the world and to the Universe. As such, we are all affected consciously and unconsciously, not only by each other through our thoughts, words, choices, actions and reactions, eating habits, life style, but also by our surroundings, environment, living space, neighborhood, media, and society, etc.

I remembered that in 2006 while my daughter and I were living with Margaret and Alan, my daughter was releasing her repressed anger towards me due to her free will being taken away by me as a demanding and strict mother at that time. We had quite a few arguments. Although our intense interactions were confined to our own bedroom, and not in front of Margaret and Alan, Margaret felt the energy of tension and anger in the house. It made her feel sick, and she did not know what was causing it. Because of that, Maitreya chose to talk to my daughter and I directly about the impact of our angry energy on Margaret’s health and the house. He suggested to us to release the anger outside the house in nature whenever we had an argument. I also remember that the apartment we rented in Gurgaon India when we first arrived there. For some reason, we all became very agitated, irritated and angry after we moved in that apartment. Maitreya then educated us that the previous residents, an older couple argued with each other a lot, and their angry energy went into the walls and the furniture of the apartment. When we moved in, we basically were wrapped in their angry energy and were greatly affected by it. Thus, we chose to move into a brand-new apartment in Gurgaon within a few months of arriving.

Everything is energy; everything connects through energy. Therefore, one of the most important lessons of spiritual development is conscious living. It requires each of us to be fully aware of energy and its immense impact on everything. It also requires us to take full responsibility not only for our own thoughts, words, choices, decisions, actions and reactions, but also the food we take into our body, our living space and surroundings, and the people we interact with.

The house we have just rented in Metairie, LA is a beautiful house. It has an open floorplan and the entire house is hardwood floors. It also has a big fenced backyard with plants and trees. However, the yard had not been taken care of. The plants, bushes and trees were not only untrimmed, but also hidden and consumed by weeds. The lawn had not been mowed for a long time and it was covered in dead leaves and weeds. The weeds were everywhere – covering the fence, occupying the space of the plants and bushes, and invading the trees. So, we decide to energetically transform our living space and surroundings to assist our own energy. All our crystals, water fountains, salt lamps, Selenite lamps and aura soma bottles are all emitting their beautiful energy to our living space, and the energy is flowing beautifully. Then we spent one morning clearing and cleaning the front yard – removing the dead bushes, mowing the lawn and putting Mulch around the bushes. We then spent 4 mornings cleaning the back yard – trimming the trees and bushes, removing the dead plants and bushes, cleaning the dead leaves, and mowing the lawn. As a result, we had 50 big 38-gallon lawn bags of trash from all the yard work. We all were drenched each day in our physical sweat due to the 100% humidity of Louisiana that we are going to have to get used to. Since Alan was doing most of the heavy lifting, he sweated so much, his clothes were soaked through as if he was just coming out of a swimming pool (LOL). Because of the cleaning, the energy of the front yard and the back yard has been completely transformed. The rose tree has started to bloom and has a new flower for us, the plants and bushes are finally able to breath freely, and the trees look brighter and lighter. It has not only grounded us and connected us with the mother earth intimately, but also uplifted us emotionally, mentally and spiritually. To be honest, we all feel good about it!

Hope you enjoy the following photos. Thank you! 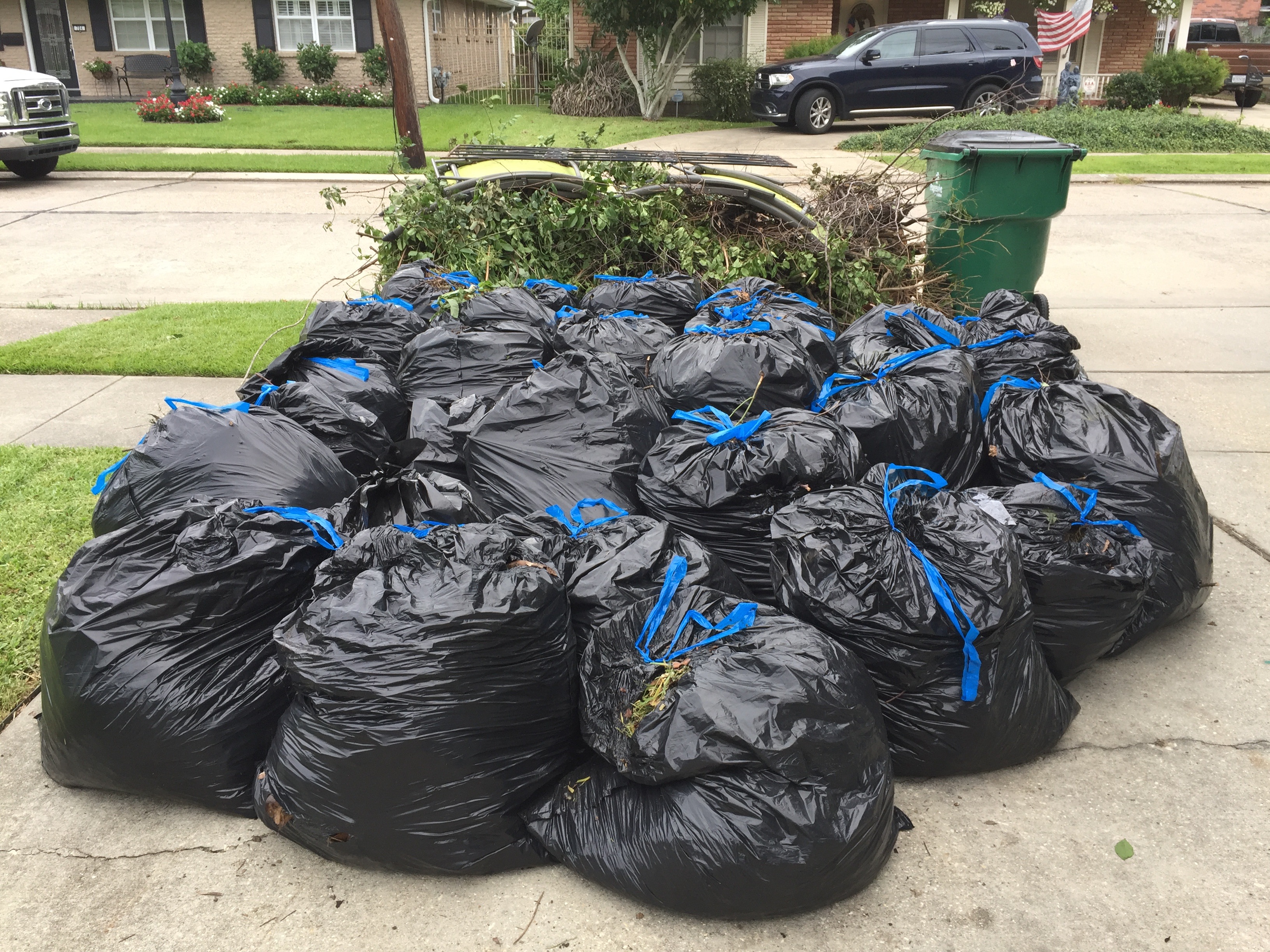 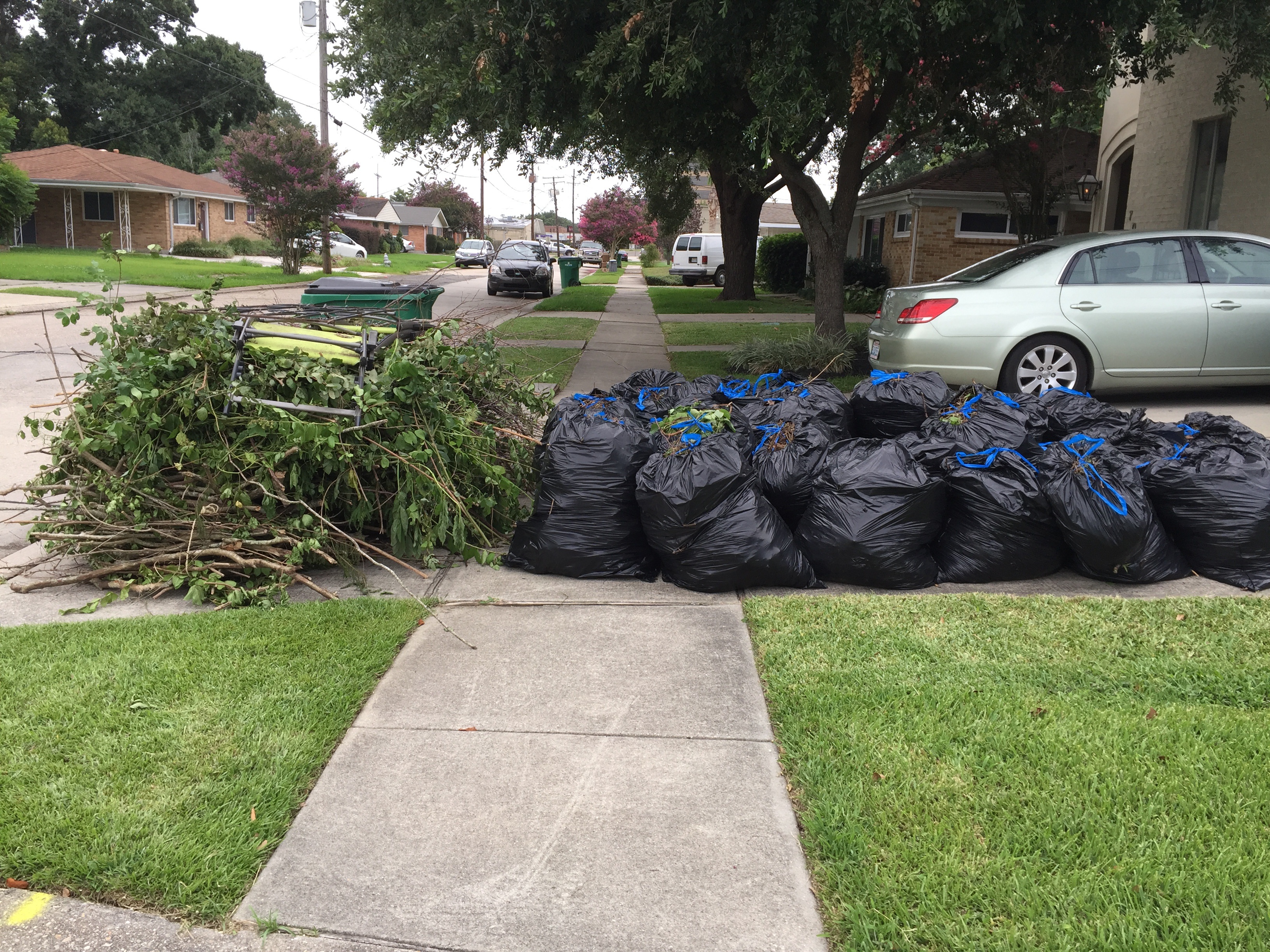 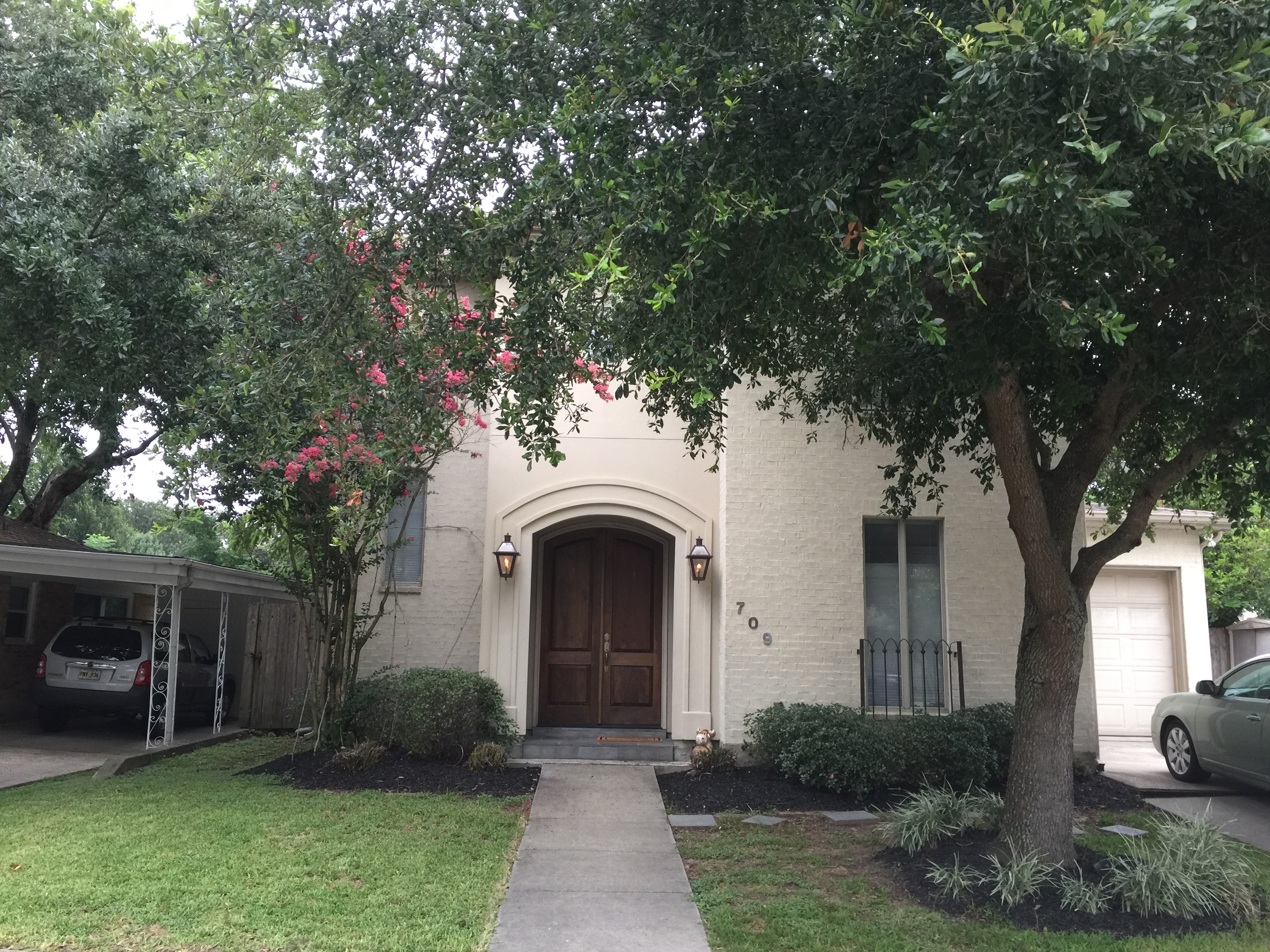 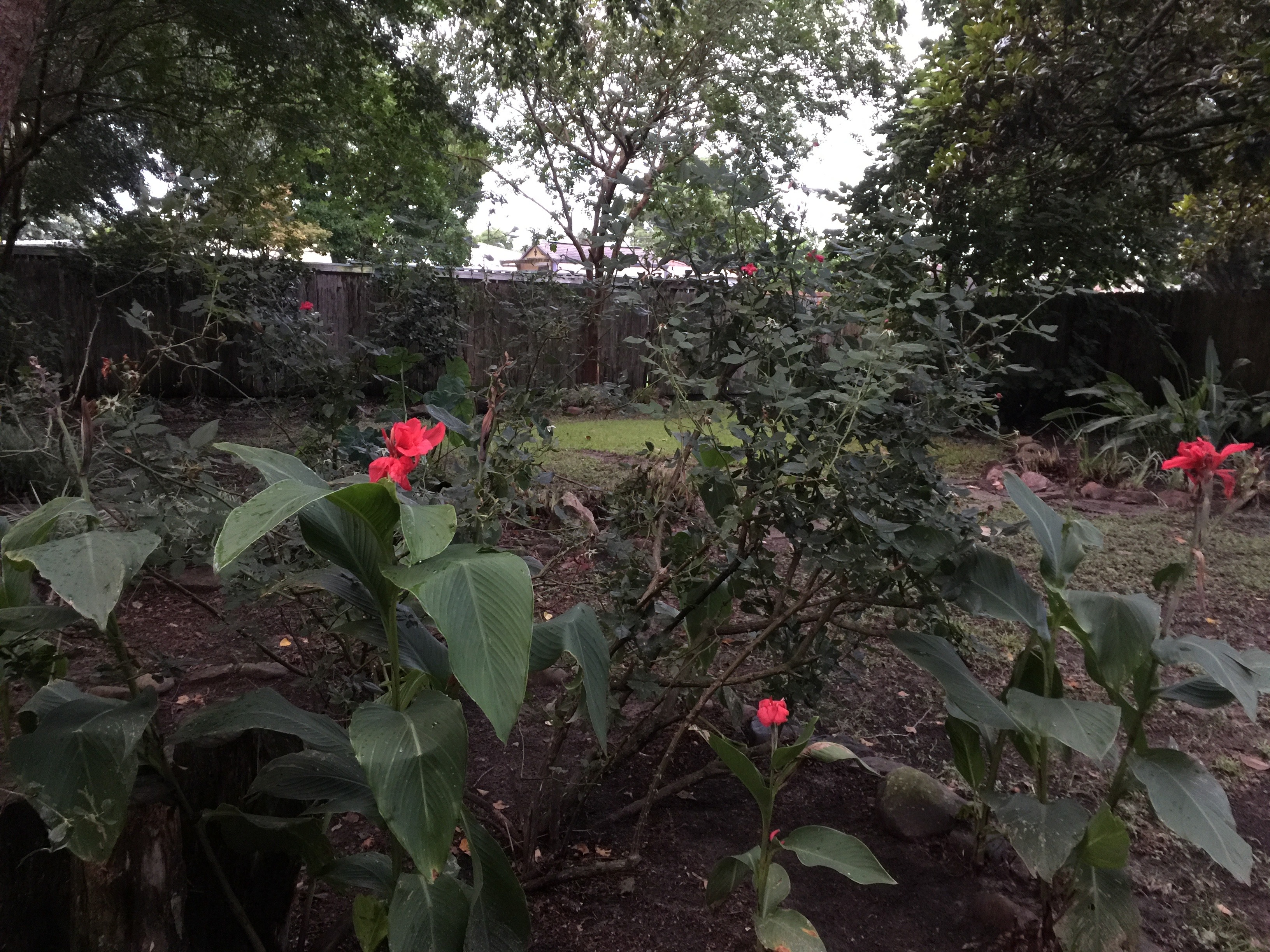 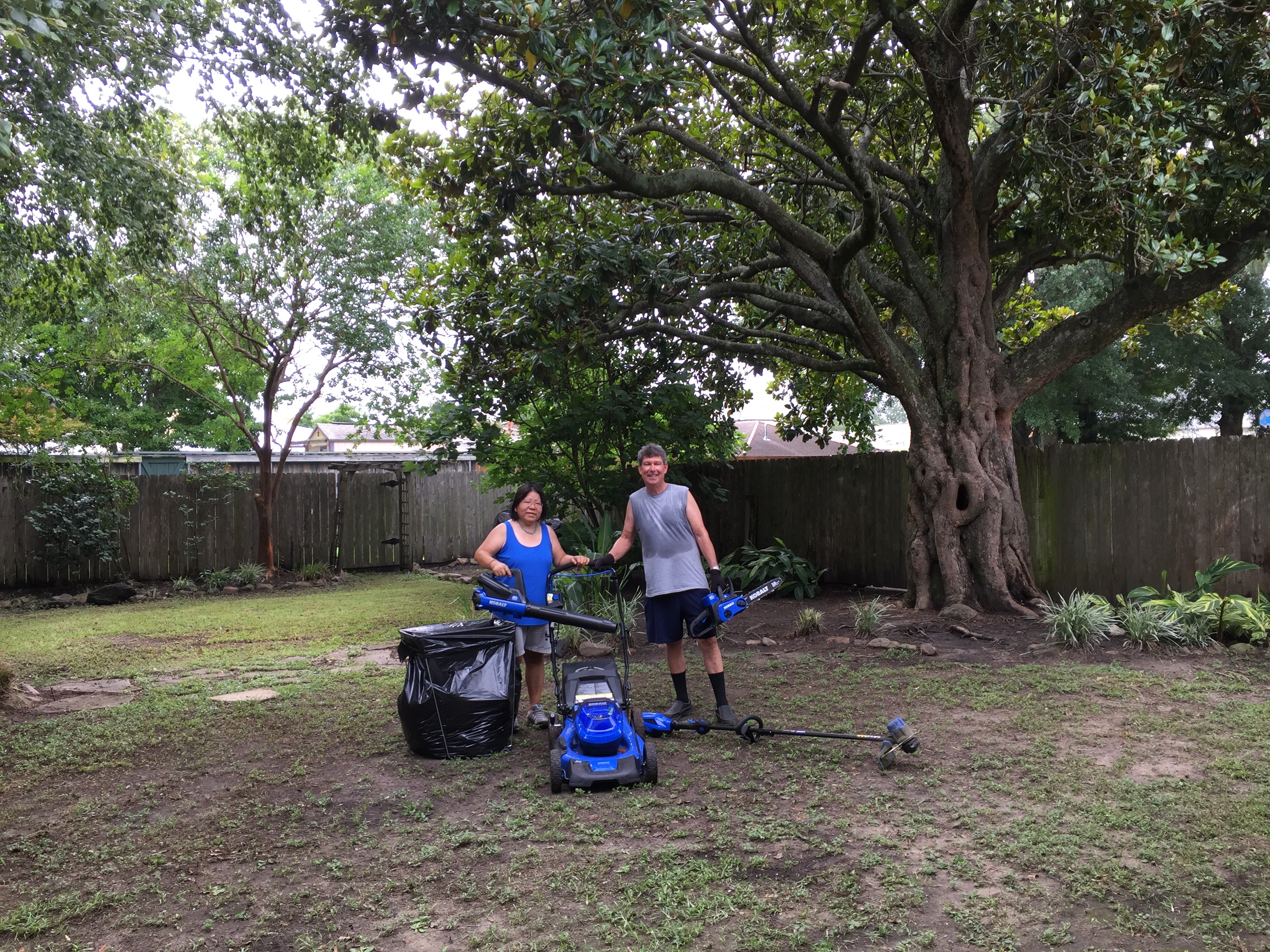