What is the Most Efficient Way to Raise Your Vibration -2?

Last month we examined the question, “What is the most efficient way to raise your vibration?” What will give you the greatest amount of progress the fastest? The answer is really very straightforward, and last month I gave you a hint: it’s all in the numbers. To do that, we looked at the case of John, somewhat of a beginner on the spiritual path, but who has an interest in and is really trying to “raise his vibration.” In our example, John’s overall “vibration” is made up of a number of different frequencies (Column 1) ranging from Higher Self (at or near 100, for example compassion, unconditional love, tolerance, non-judgment, etc. at least for some kinds of people and some situations). At the same time, John harbors a great deal of anger, fear, intolerance, judgment, etc. for other people and different circumstances (lower, Self frequencies). In other words, John is just like most of us. The question was whether John would raise his vibration faster by trying to do more “good” things (closer to the frequency of Higher Self) or trying to eliminate “bad” things (closer to Self frequencies)? It was all pretty clear, as the numbers don’t lie. John would make much faster progress by doing the “hard” work of clearing or eliminating the lowest frequencies in his vibrational makeup than by trying to improve more on his already relatively highest frequencies (the “easy” stuff).

When I showed this example to a friend for feedback, he said, “But John is a pretty bad case in many ways, and I don’t think most “spiritual” people are nearly that bad or extreme. I know I’m not, so I don’t see how it applies to me!”

“OK”, I thought. “Maybe he has a point. Let’s try out the number and see!” For comparison, let’s quickly look at “Jim” (see Table C) who is almost identical to John, but who starts off in Column 1 with no frequency below 40 (average vibrational frequency = 70.00, compared to John who started off at 50.09). If Jim works to “perfect” all of his frequencies at 50 or above (more toward Higher Self) as John does in Table B (see last month), he ends up with a 91.43 “average vibration” (I’m jealous!) for an overall 23.4% improvement over his original state. 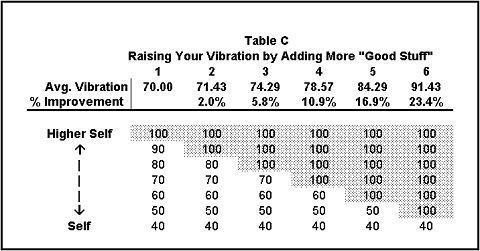 But what happens when Jim does nothing to “perfect” his higher frequencies, but improves is overall vibrational frequency only by clearing his lowest frequencies (see Table D)? The principle is the same, and the results are the same as they are for John. Comparing Table C to Table D, it is obvious that Jim gains more not by trying to “perfect” his good qualities (frequencies), but by clearing or eliminating his fears, doubts, anger – all the “Bad Stuff” from his spiritual, emotional, mental, etheric, and physical bodies. Jim, who is more advanced spiritually (higher initial vibration) than John, still has more to gain by this strategy than John who is less spiritually advanced.

So you see, the answer to the most efficient way to raise your vibration is all in the numbers – if – you need a left-brained demonstration to be convinced. But a left-brained demonstration really isn’t needed at all. The same principle is amply emphasized in Maitreya’s teachings (channeled by Margaret McElroy) as evidenced by just a few of the dozens of references to this subject in his writings:

More specifically, the lowest frequencies have to do with fear, doubt, anger, judgment, intolerance, etc.

I suspect that Spirit (including Maitreya) doesn’t use numbers any more than they use language to think or to communicate among themselves. Think about it. How many lifetimes have you had to learn that 2+2 = 4? This is knowledge that must be learned each time we reincarnate on the earth plane. Spirit simply knows intuitively that, if you are anchored to the ground (the Self), you can’t fly!

And remember, what seems to be the easy way (more classes, more readings, etc.) is not nearly as effective in raising your vibrational frequency as dealing with what is often quite hard:

When it comes to soul evolution and raising our vibrational frequency, each of us has a choice. We can continue to plod along lifetime after lifetime trying to take the easy route, or we can take the most efficient way by rolling up our sleeves and working on the stuff that really matters. Ultimately, it is your journey, your life. You have to do the work, you have to make the necessary changes in your life. But also remember that there are teachers, healers, and counselors that are ready and willing to lend a helping hand.

So which strategy will you choose? Frankly, I choose not to limit myself to either one. I choose to do both – but I know where my priorities are!